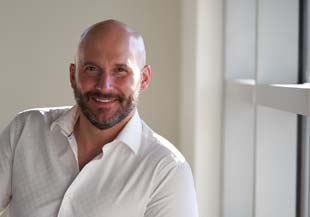 Raised in a family of life-long learners, Dr. Schaefer grew up in a bedroom community of St. Louis. His mom worked as a teacher and his father owned his own small business. His older sister followed in her mother’s footsteps into the teaching profession, while Dr. Schaefer set out to care for others.

He earned his Bachelor of Science degree in Biological Sciences from Southern Illinois University Edwardsville and his dental degree from the University of Florida. Like Piedmont Periodontics founder Dr. Michael Scott Bartruff, Dr. Schaefer received his Certificate in Periodontics from the Louisiana State University Health Sciences Center in New Orleans. The doctors met years ago via the school’s alumni network, developing a professional relationship based on similar treatment philosophies.

Dr. Schaefer has practiced in Florida, Illinois, and Missouri. He has earned certification as a Diplomate of the American Board of Periodontology, a rigorous process consisting of written and oral examinations covering all aspects of periodontal treatment and dental implants. He maintains membership in the American Dental Association and the American Academy of Periodontology. In 2019, he was named to St. Louis Magazine’s list of Top Dentists (usatopdentists.com).

Outside of work, Dr. Schaefer enjoys traveling, dining out, listening to live music, watching SEC football, and spending time with friends and family, including his niece and twin nephews.